Would you be able to spot a fake 2 pound coin? Here are some handy tips and tricks to identify whether that £2 coin in your change is genuine or a counterfeit.

Are there many fake 2 pound coins in circulation?

Police in Yorkshire arrested a fraudster who ordered thousands of fake two pound coins from China to sell at car boot sales. 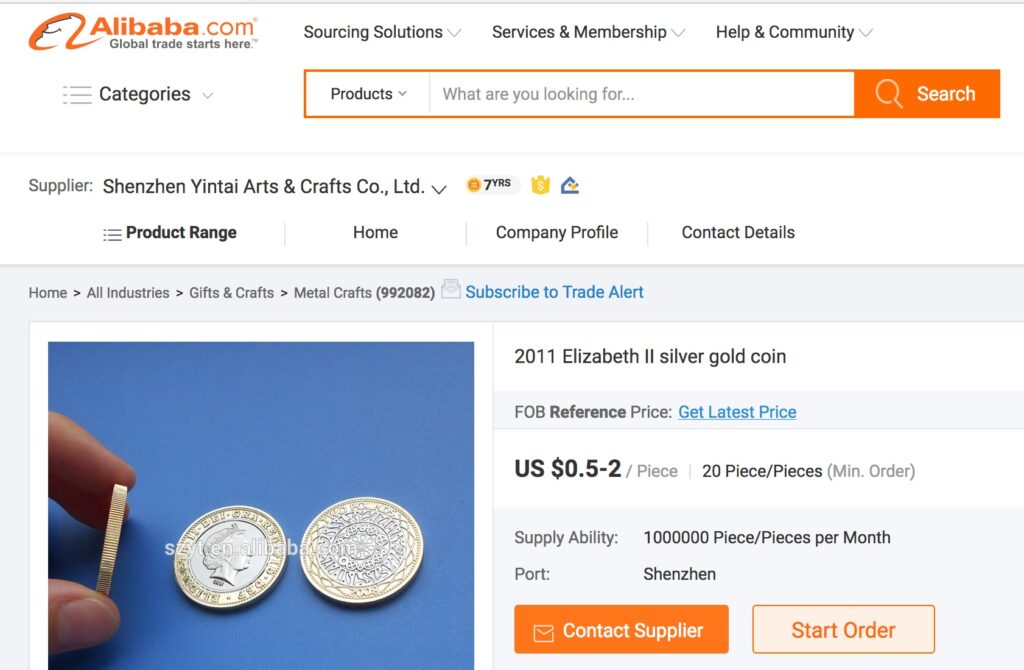 Some fake two pound coins are unsophisticated copies that are easy to spot. They don’t weigh the same as a genuine £2 pound coin (12g), and they aren’t made of two different alloys. Often they are simply pressed metal discs with a painted outer ring. Many of the crude fake £2 coins also don’t have the correct edge inscription ‘STANDING ON THE SHOULDERS OF GIANTS’. More sophisticated forgeries can be spotted by performing a number of visual checks:

(1) On a fake 2 pound coin, the silver-coloured core isn’t quite flush with the gold-coloured outer ring. Fake £2 coin often miss the fine dots around the perimeter of the inner core.

(2) A counterfeit £2 piece has a lack of detail on the Queen’s portrait. There’s little texture to her hair, and her crown isn’t distinct from her hair.

(3) Fake £2 coins are missing the initials of the designer (IRB – Ian Rank-Broadley) below the Queen’s portrait. 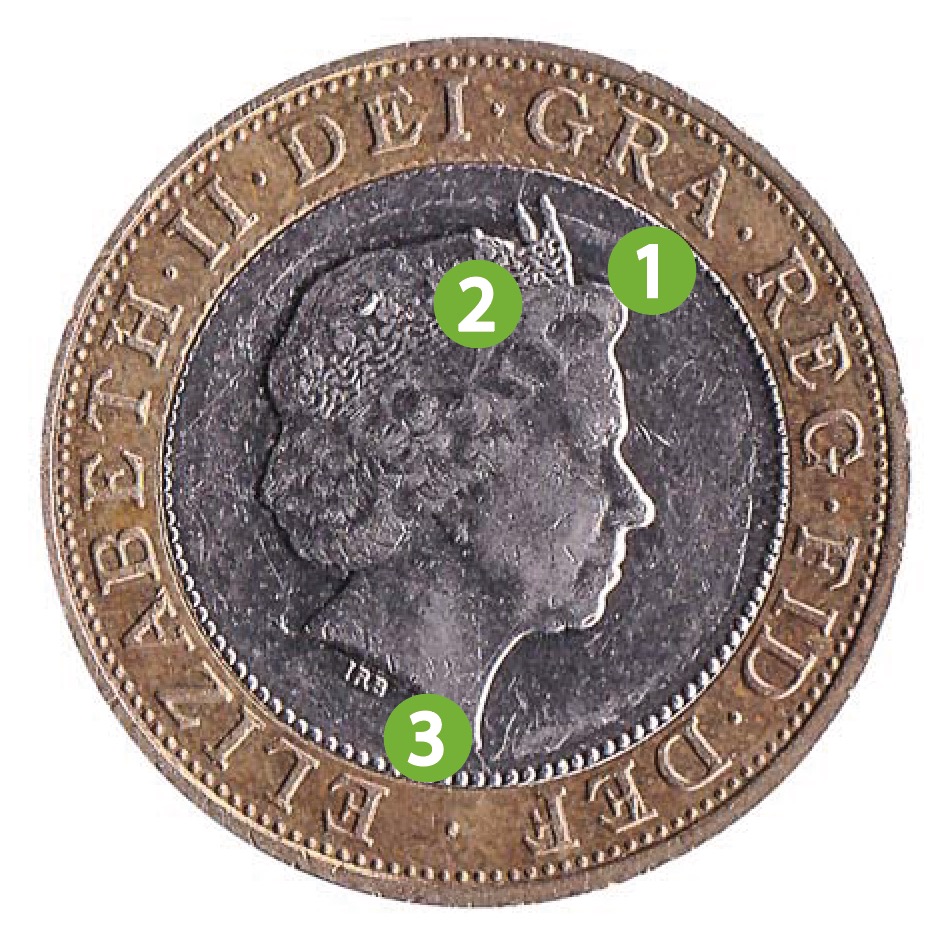 (4) The details on the reverse side of a fake 2 pound coin are less clear. On a genuine £2 coin you can see tiny cogwheels, where as on a fake £2 coin these are crude disks.

(5) The most common design of the £2 coin, the ‘Technology’ design, has a latent security image. It is not immediately apparent, but can be seen when the coin is tilted. Fake £2 coins are not only missing the more obvious parallel lines in the centre, they also don’t have the latent security image. 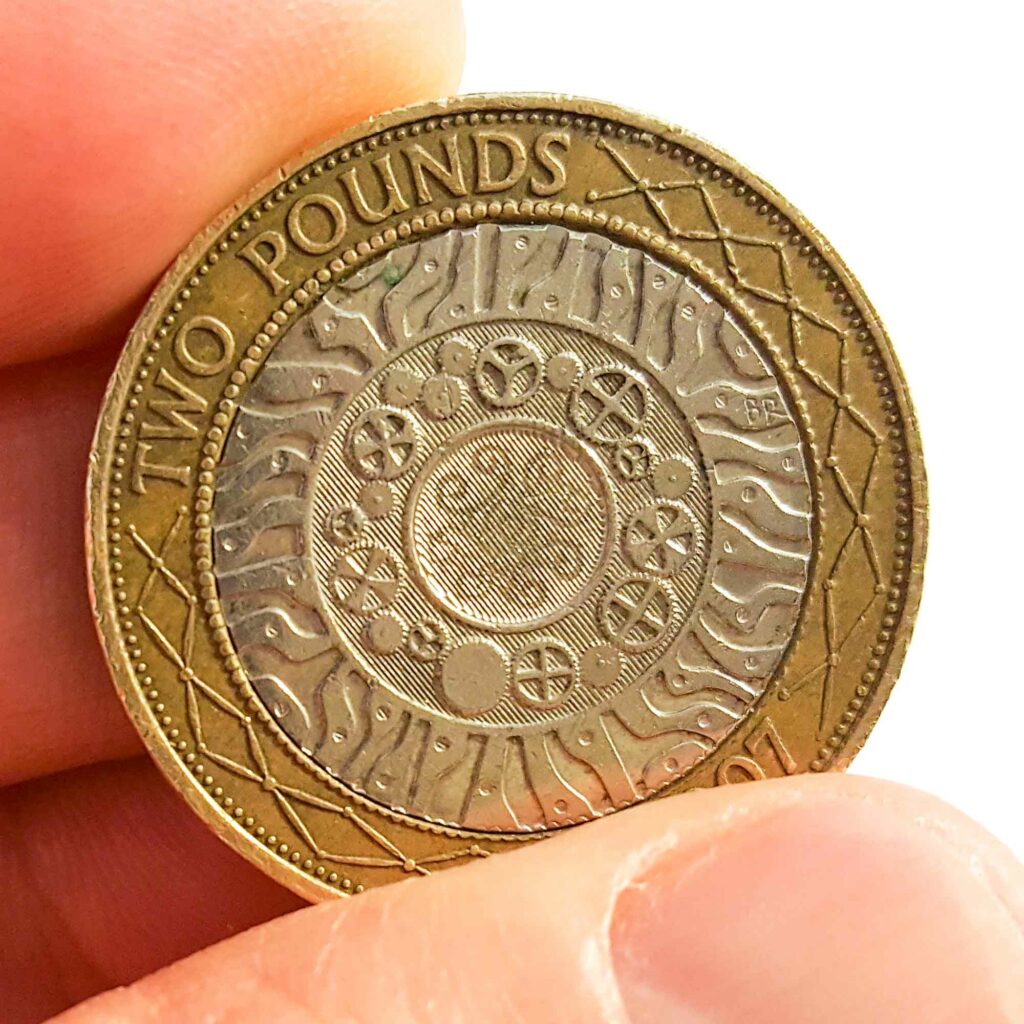 There are more than 60 different designs of the £2 coin’s reverse side. Fake two pound coins in most cases have the ‘Technology’ design, but fakes with different designs have been spotted. In general, fake £2 pound coins lack the detail of the genuine versions. If you are in doubt, it’s a good idea to compare the coin in question with a real coin or picture of one. Here are pictures of all £2 pound designs in circulation.

What to do when you spot a fake £2 pound coin?

If you spot a fake 2 pound coin in your change, you should certainly not try to spend it, as this would be an offence under the Forgery and Counterfeiting Act 1981 (Section 15). The right thing to do is to hand the counterfeit coin over to your local police station. Unfortunately the coin will then be confiscated, and you won’t receive a genuine £2 coin in return.

Handing in counterfeit coins will help the authorities to identify the types, quantity and quality of fake coins in circulation. It’s also a good idea to make a picture of the fake £2 coin and make an online report of counterfeit coins here.