On several occasions customers have asked about the value of their 1000 Mark Reichsbanknote dated 21 April 1910, issued in Berlin. Is it exchangeable at all? And is it worth over £300 pounds? Let us explain …

Not all Marks are the same

The German national currency before the Euro was the Deutsche Mark. Since 1871, different kinds of ‘Mark’ have been the currency of Germany:

At Leftover Currency we exchange Deutsche mark banknotes and coins, issued from 1948.

The Mark of the German Empire

The Mark, also known as ‘Goldmark’, was the national currency of the German Empire from 1871 until 1914. The Mark was part of the ‘golden standard’ monetary system. The value of one mark was fixed to the value of 0.358 grams of gold.This changed in 1914, with the outbreak of World War I. To pay for the war, and to protect its gold reserves, Germany abandoned the gold standard. From August 1914, Reichsbanknotes were no longer exchangeable for gold.

Before August 1914, each German banknote issue had to be covered at least one-third by gold reserves. Starting from August 1914, newly set up loan banks could simply print money. 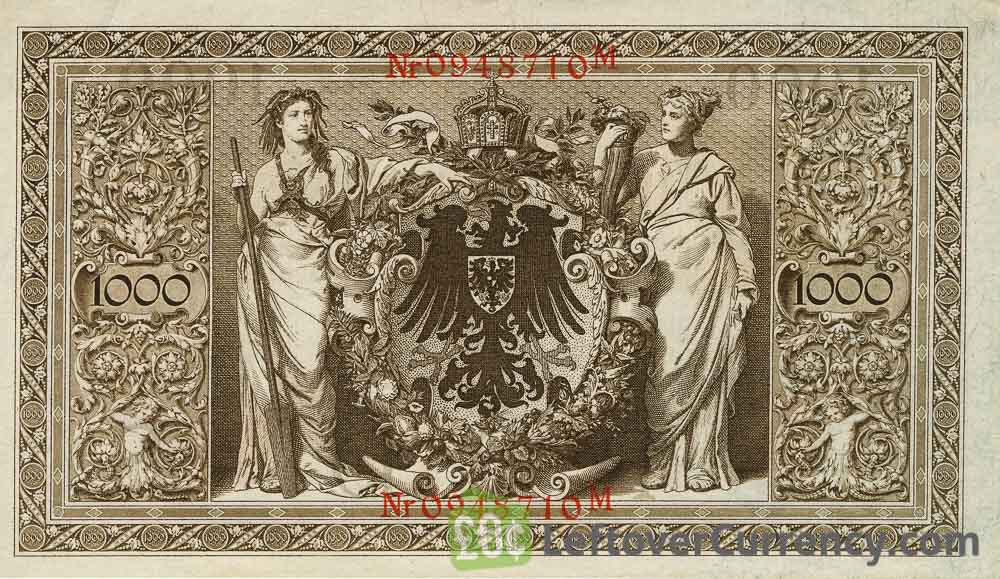 The red sealed 1000 Mark Reichsbanknotes dated 1910 were printed until the end of World War I. This is a crucial piece of information when it comes to valuing them. Their value was not covered by gold reserves. These banknotes were printed in very large quantities to fund the war.

Hyperinflation wipes away the value of the Mark

Printing large quantities of money led to inflation. The inflation got significantly worse following Germany’s military defeat in 1918. The value of the Mark was wiped away:

The German hyperinflation of the 1920’s is well described in Adam Fergusson’s When Money Dies:

In October 1923 it was noted in the British Embassy in Berlin that the number of marks to the pound equalled the number of yards to the sun. Dr Schacht, Germany’s National Currency Commissioner, explained that at the end of the Great War one could in theory have bought 500,000,000,000 eggs for the same price as that for which, five years later, only one egg was procurable.

The monetary value of the 1000 Mark banknotes issued before and during World War I was wiped away by the hyperinflation of the 1920’s. The collectable value of these banknotes is low, given that they were printed in such huge quantities. Even today, more than 100 years later, these banknotes are quite common.

Because of these reasons, the value of a red seal 1000 Mark Reichsbanknote dated 1910 is low. The average price these banknotes sell for on auction sites like Ebay is between £1 and £2 a piece. The screenshot below is an example of a 1000 Mark 1910 banknote sold on Ebay recently for £0.99 pounds. 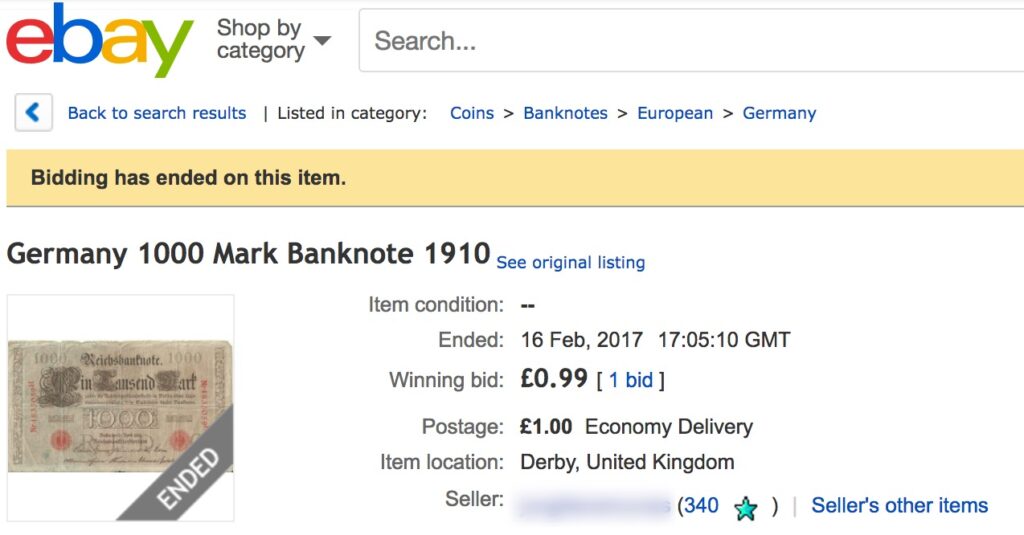