We have been busy adding new currencies to the Leftover Currency website. New currencies accepted for exchange include both foreign coins and obsolete banknotes. Here’s an overview.

Coins from Brunei are included in the list of new currencies accepted for exchange. All Bruneian coins from 1 sen to 50 sen are now exchangeable on the Leftover Currency website, as are Brunei dollar banknotes. These banknotes were issued by Italian forces in occupied Greece during World War II. These drachma banknotes from the 1940s were no longer exchangeable following the defeat of the Axis powers. We have reinstated the exchange of Cassa Mediterranea banknotes for a value that covers their numismatic value.

From 1948 until 1989 the East of Germany was under the control of Soviet Russia. East Germany had its own currency, the DDR mark, which was exchangeable until 1990. We have reinstated the exchange of East-German DDR mark banknotes.

Did you travel to Egypt recently? If you have, then it’s likely that there are a few Egyptian coins gathering dust in your drawers. We have now started to accept Egyptian 1 pound and 50 piastres coins for exchange. Anyone who visited East Germany in the 1970s or 1980s was obliged to change their West German currency for East German forum cheques. We have started with the exchange of Forum Cheques from Cold War era East Germany.

We have started with the exchange of all coins from the Isle of Man. From 1 penny to 2 pounds, all Manx coinage is now exchangeable on the Leftover Currency website, as are Isle of Man pound banknotes.

Get started here: Exchange your Isle of Man pound coins Also included in the new currencies accepted for exchange are coins from Morocco. We have started with the exchange of all Moroccan dirham coins, from the smallest coin of 10 santimat (0.10 dirham) to the most valuable Moroccan coin of 10 dirhams. It has taken us some time to figure out the logistics, but we have finally cracked it: Exchanging New Zealand coins is now possible using our website. All current coins from New Zealand, from 10 cents to $2 dollars are now accepted for exchange. 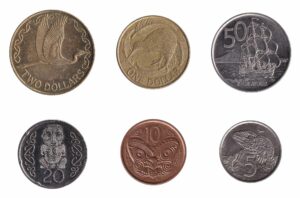 Poland banknotes issued before 1995 belong to the Old Zloty currency, replaced by the current new Polish Zloty at a rate of 10,000 old to 1 new. We have started with the exchange of old Polish Zloty banknotes at a rate that covers their numismatic value.

Predecimal and old style large British coins are often found in drawers. British banks have stopped accepting these from their customers recently. We have started exchanging predecimal and withdrawn British coins, accepting all coins from a farthing up to the old brass £2 commemorative coin.

Based on our customer’s feedback, we have included Singapore Dollar coins in the list of new currencies accepted for exchange. Currently we are able to exchange all SGD coins from the Third and Second series. We will add coins from the First series in the second half of this year.

Extra currencies to be added soon

We are soon going to add new currencies. Keep an eye on our site to discover which extra currencies will be added soon. Here are the first few to be added soon:

The full list of all currencies for which we exchange foreign coins and banknotes can be found on our Exchange Rates page.

Do you have foreign coins or banknotes from a currency which we do not exchange yet? What currency would you like us to add to the list? Feel free to get in touch via our contact page, or leave a message on the Leftover Currency Facebook page.