In this Halloween edition blog article we will present you our top-10 for the world’s scariest banknotes. Be it ghosts, murderers, hidden symbols, horrible deaths or unsolved mysteries: These banknotes are seriously spooky. Read at your own risk.

Number 10 in the list of scariest banknotes: The 100 dinara banknote from Serbia. This note features the famous and mysterious inventor Nikola Tesla, who designed the first hydroelectric plant and became the inspiration for Elon Musk’s Tesla car brand. Tesla had an intense fondness for pigeons and was said to love pigeons more than people. Tesla’s favorite pigeon is pictured on the banknote’s back side.

In his biography, Tesla told how, one night, his favorite pigeon flew in through the window and Tesla realised that she had something important to tell him: She was dying. Tesla describes the moment that will haunt him for the rest of his life:

“There came a light from her eyes – powerful beams of light. Yes, it was a real light, a powerful, dazzling, blinding light, a light more intense than I had ever produced by the most powerful lamps in my laboratory”.

Featured on the banknote of 50 Argentine Pesos is the gaucho Antonio Rivero. He’s considered a national hero in Argentina, leading the rebellion against British rule on the Falkland Islands. In fact, he murdered five senior leaders of the Falklands British settlement in a gory killing spree.

Known as the ‘Port Louis Murders’, a witness describes:

“I met Antonio Rivero and his gauchos, running towards the point armed with muskets, pistols, swords, dirks and knives. It was very evident they were going to kill someone. […] I left Don Ventura for dead, he having been wounded by a musket ball in his throat, his head cut open, and his hand almost cut off by a sword, afterwards he escaped by a back window…”

Antonio Rivero and his gang killed five settlers during their violent killing spree. On the $50 pesos banknote, Rivero is pictured on horseback flying the flag of Argentina, looking down on the town of Port Louis, moments before all hell would break loose.

This banknote of 200 kronur from the Faroer Islands (part of Denmark) features ghosts on both sides: On the front side is the image of a ghost moth: known for its ghostlike hovering display flight, slowly rising and falling, like a phantom. In folklore, ghost moths are believed to be the souls of the departed.

Number eight on our list of scariest banknotes, the back side of the 200 Faroese Kronur note features the uninhabited islet of Tindhólmur. The small island has a local legend that explains why it became uninhabited:

“A local farmer and his family used to live on the island. But one day everything changed. A huge eagle came and took the farmer’s two-year-old child and flew with it to the bird’s nest on the highest peak of the islet. The mother of the child hurried up to the peak but was too late. The young of the eagle had already eaten the eyes of the child. This peak is called ‘Ørnatindur’ meaning “Peak of the Eagle”.

The peak of the eagle is visible on the 200 kronur banknote: It’s the highest peak on the rocky island of Tindhólmur. The ghost island is open to visitors, but they are warned to keep their eyes peeled…

Furthermore, on the back side of the 20 Konvertible Marks banknote is a fragment from a medieval tombstone located in the Radimlja necropolis ‘city of the dead’. The tombstones are known as ‘Stećci’ sites, meaning ‘standing’ in Slavic language. The tombstones have carvings of male warrior figures, standing tall.

Around 60,000 medieval ‘Stećci’ tombstones have been found so far in Bosnia and Herzegovina, spread around multiple necropolises. If you’re in the area, maybe you will encounter one of the ‘standing death’.

#6: 500 Spanish Pesetas banknote - Burial of the Count of Orgaz

This 1940-dated banknote of 500 Spanish Pesetas is number six in the list of 10 scariest banknotes. The note features a death scene from the painting ‘The Burial of the Count of Orgaz’ by El Greco in 1586. It depicts a popular medieval legend.

According to the legend, at the time when the Count was murdered, two Saints came down from heaven to bury the Count by their own hands. So in fact the Count died and was then buried by two dead Saints. 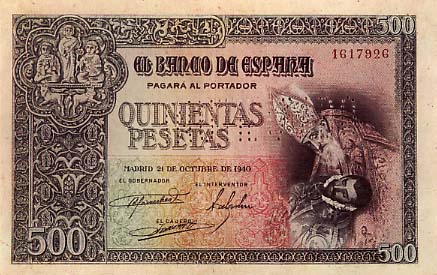 The 500 pesetas banknote from 1940 shows one of the dead Saints, St Augustine, bent over the dead Count. That’s two dead people on one banknote!

Number 5 in the list of the 10 scariest banknotes is a banknote everyone is familiar with: The $1 dollar bill from the United States. The number 13 is considered unlucky in some countries. Some hotels don’t have a 13th floor, similarly some airlines don’t have a row 13.

Fear of the number 13 is a recognised phobia: triskaidekaphobia. If you prefer to stay away from all number 13s, you may want to consider removing the $1 US dollar bills from your wallet…

Thirteen was the original number of American states and the number 13 is featured extensively on the $1 US dollar bill:

It’s believed that the $1 dollar banknote has 13 references to the number 13. Lots of theories exist of what the remaining ones are. Maybe you can find the missing ones?

You may wonder what is so scary about the 50 Austrian Schilling banknote with the portrait of Ferdinand Raimund, actor and dramatist born in Vienna in 1790.

We selected this bill as the 4th scariest banknote because of the horrible way this poor gentleman died.

Aged 46, Ferdinand Raimund was bitten by a wild dog. Although the flesh wound was gory, it didn’t kill him. However, Raimund believed the dog to be rabid. Rabies is a horrible viral disease that causes extremely painful inflammation of the brain, violent movements and death within three months.

Raimund decided to take matters into his own hands. He took a rifle and shot himself in the mouth. The bullet bounced off the inside of his skull and deflected, missing his brains. Ferdinand Raimund lived on for another 5 days, tormented by the painful gunshot wound in his head, after which he died from his injuries.

After Raimund died it turned out the dog was not rabid.

Death is often represented by the image of the Grim Reaper, who causes the victim’s death by coming to collect the person’s soul. Personified as a human skeleton in a shroud and clutching a scythe, the Grim Reaper takes centre stage on the banknote of 1000 Swiss Francs from the 5th series, Switzerland’s highest value banknote in circulation during the 1970’s. Third place in our list of scariest banknotes, the haunting scene on the back of the 1000 Swiss francs banknote shows the Grim Reaper and three of his victims: An old man, a young woman and a young child. In the left hand corner is an hourglass, making it clear that our days are numbered. When the sand runs out, our time is up.

The Grim Reaper is facing towards the holder of the banknote… Could you be The Reaper’s next victim?

German ‘Notgeld‘ is scary on its own already: During the 1920’s the German economy was in crisis and inflation was sky high. Many cities and towns started issuing their own ’emergency money’, ‘Notgeld’ in German.

These banknotes, or in fact ‘vouchers’, were not backed by gold or deposits and they often lost their value shortly after they were issued.

The design of these emergency banknotes often gives away that they were issued during times of economic and political crisis. Such as this banknote of 75 pfennig (3/4 mark) issued by the town of Oberammergau in the Bavarian Alps, featuring: Bubonic Plague…

A giant Grim Reaper is featured mowing the town with a scythe. The year printed on the banknote, 1634, is when the bubonic plague death rate finally went down. The villagers vowed that if God spared them from the plague, they would produce a Passion Play every 10 years depicting the life and death of Jesus. The first Oberammergau Passion Play was performed in 1634 and it is still being performed in the present day, every 10 years, most recently in 2010.

Jesus on the cross is depicted on the note as well, below the Grim Reaper, referring to the Passion Play performed in the town since it was saved from the Bubonic Plague. This grim Notgeld bill is number two in our list of scariest banknotes.

The number one in the list of scariest banknotes of all time are Chinese Hell Banknotes, also known as Hell Money.

Printed by commercial companies, these hell bank notes have no legal tender value, at least not in this world: They are meant to be spent by the deceased in the afterlife.

Living relatives offer Hell Money to the deceased by burning these banknotes, or by placing them in the coffin. The practice is common to the Ancient Greek ‘Charon’s obol’, a coin placed in or on the mouth of a dead person before burial. The ‘obol’ coin is meant to pay Charon, the ferryman of the Underworld.

A Chinese custom, hell money is offered to the dead, so they can bribe Yama, the King of Hell, for a shorter stay or to escape Hell altogether. The person on the portrait on most Hell Banknotes is the Jade Emperor, the monarch of all deities in heaven. In Chinese mythology, The numbers on Hell Banknotes are often very high, 10 Million is common. This guarantees that the deceased can live a lavish afterlife.We hope you enjoyed our top-10 of the world’s scariest banknotes of all time. If you have a suggestion for other scary banknotes feel free to let us know. Here are a few other scary banknotes that just didn’t make the top-10: