Have you ever wondered where the world’s major currencies got their names from? In case you have, here are the answers, explaining the origin of all currency names we exchange at Leftover Currency.

The Thai baht is the currency of Thailand. The word baht means ‘quarter’. This is because the baht was originally regarded as a quarter of a tael, the standard silver weight of eastern Asia. The Moroccan dirham is the national currency of Morocco. The name dirham is an Arabic version of the Greek drachma. The origin lies in the Ancient Greek word dragma, meaning ‘handful’. The most well-known of all currency names, the name and history of the dollar is closely related to that of the thaler, with dollar an American form and pronunciation of the earlier thaler. The dollar was first authorized for minting in 1792, although it was not struck until two years later. Its equivalent in the South American states is the peso. The familiar dollar sign ($) probably developed as a variant of the former Spanish contraction for the peso or piece of eight, which would have been the figure ‘8’ between two sloping lines, thus: /8/. The Greek Drachma was the currency of Greece before the introduction of the Euro in 2002. In Ancient Greece, drachma was the name of a standard weight and silver coin. The origin lies in the Greek word dragma, meaning ‘handful’, pointing to a handful of obols, subsequently standardised as 6 in number. The obol was both a weight and a small silver coin equal to one-sixth of a drachma.Exchange your Greek Drachmas The name euro was officially adopted on the Madrid European Council in 1995. The word euro was chosen because it is a clear and simple reference to Europe, and because the word ‘euro’ is the same in all official languages of the European Union. The name escudo is Spanish for ‘shield’. The first gold escudos were minted in 1537 to supersede the excelente. The shield was the Spanish coat of arms that appeared on the obverse of the escudo coins. There was also a Portuguese escudo from the 18th century, which remained the currency of Portugal until the introduction of the Euro in 2002. The escudo remains the national currency of the former Portuguese colony Cape Verde. The franc was first struck as a gold coin under Jean le Bon in the 14th century, and adopted as a basic denomination by a number of other countries and French colonies. The coin itself, like many coins in other currencies, has gradually been downgraded in value and appearance over the centuries. The franc was issued as a silver coin in the 16th century and in more recent times as simply an aluminum piece. The name *franc* almost certainly derives from the original Latin inscription on the coin, FRANCORUM REX , ‘King of the Franks’.

The franc was the currency of France, Belgium and Luxembourg until the introduction of the Euro in 2002. The Swiss Franc is the only ‘Franc’ currency in Europe still in use today. 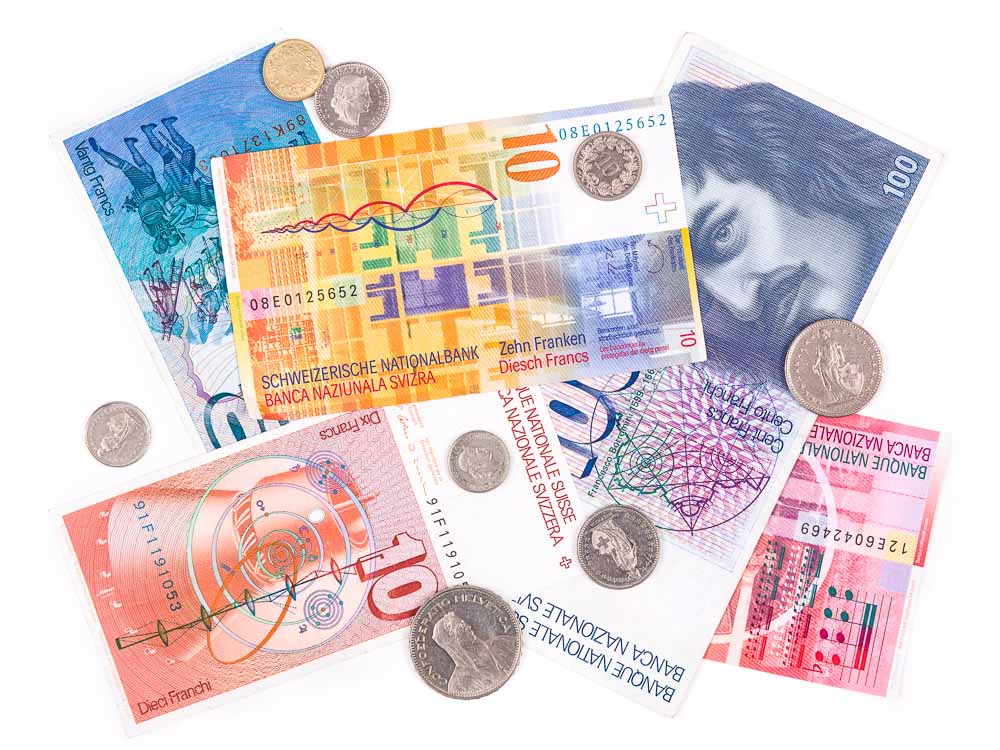 The forint is the national currency of Hungary. The ‘forint’ is the Hungarian equivalent of the florin. The origins of the florin lie in the gold coins of Florence struck in the mid-13th century. ‘Gulden’ was the name of the original gold coin of Germany, Austria, Hungary and other countries that corresponded to the florin, acquiring the name of guilder (gulden) in the Netherlands and current from the 14th century. The florin was a golden coin struck in Florence in the mid-13th century, which became popular all over Europe. The name ‘gulden’ simply means ‘gold’. The Dutch Guilder was the currency of the Netherlands until the introduction of the Euro in 2002. 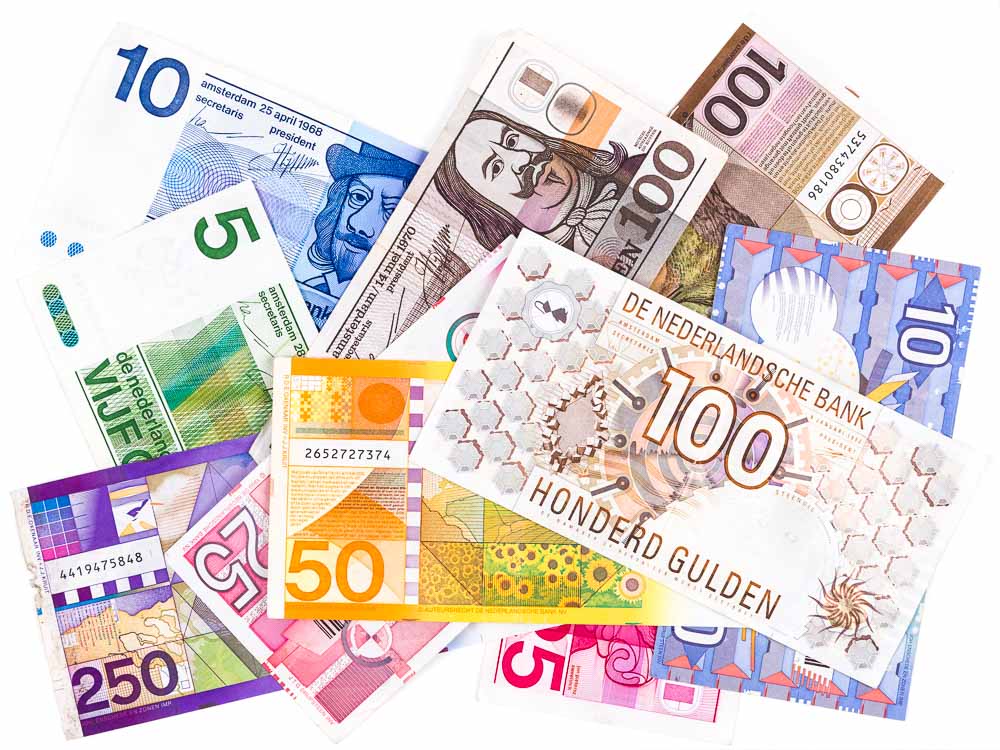 The Czech Koruna is the national currency of the Czech Republic. The Koruna was also Slovakia’s national currency before the introduction of the Euro in 2009. The name koruna means ‘crown’ and has its origin in the Latin word ‘corona’. It is related to similarly named krona and krone currencies of Northern Europe. The krona is the name of the national currency of a number of countries in Northern Europe: Norway, Sweden and Iceland, where it is spelled *króna*. As with all similarly named coins, like the krone, kroon and koruna, the reference is to a crown, represented on the obverse or reverse side of most krona coins. The currency name krona originates from the Latin word for crown, ‘corona’. The Danish Krone is the national currency of Denmark and the Farœr Islands. As with similarly named krona and koruna currency names, the name krone is a reference to a crown, represented on the obverse or reverse side of Danish krone coins. The name krone finds it origin in ‘corona’, the Latin word for ‘crown’.Exchange your Danish Krone The Estonian Kroon was the currency of the Baltic nation of Estonia until the Euro changeover in 2011. The name kroon means ‘crown’. It is related to the currency of other countries in Northern Europe (such as the Danish Krone, the Norwegian, Swedish and Icelandic Krona) and derived from the Latin word for crown, ‘corona’. The Kuna is the currency of Croatia. The word kuna means ‘marten’ in Croatian. The origin lies in the use of marten pelts as units of value in medieval trading. The name ‘kuna’ has no relation to the Slavic currencies called ‘koruna’. 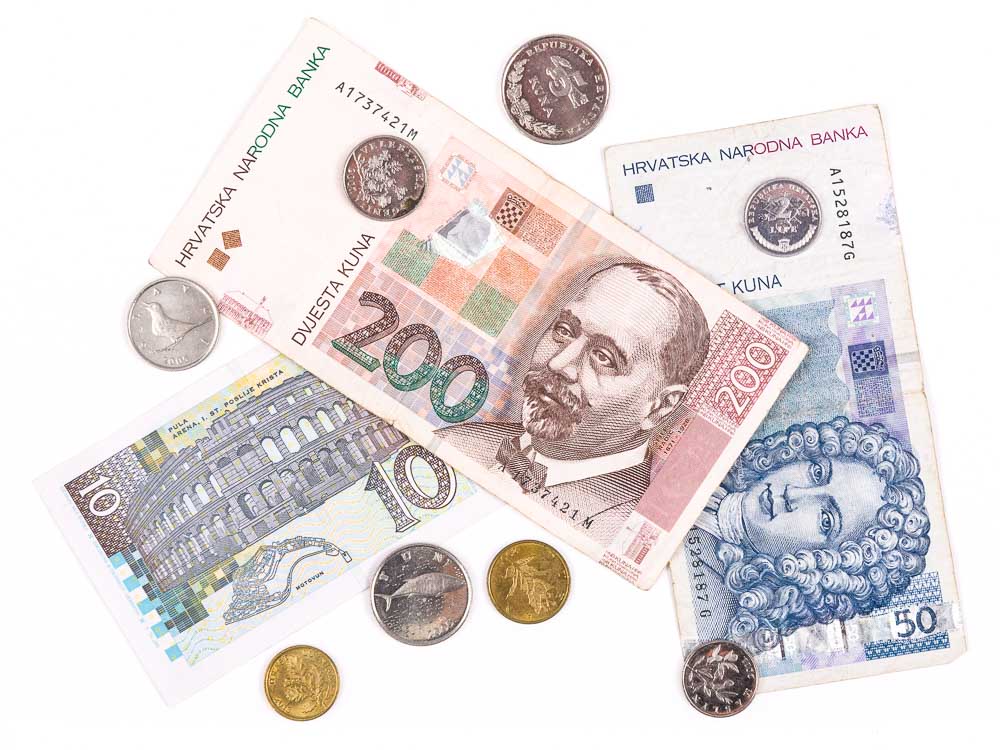 The Leu is the currency of Romania and Moldova. The name leu (plural lei) means ‘lion’, from the heraldic beast on the original coin.

Exchange your Romanian Lei (2005 and later) 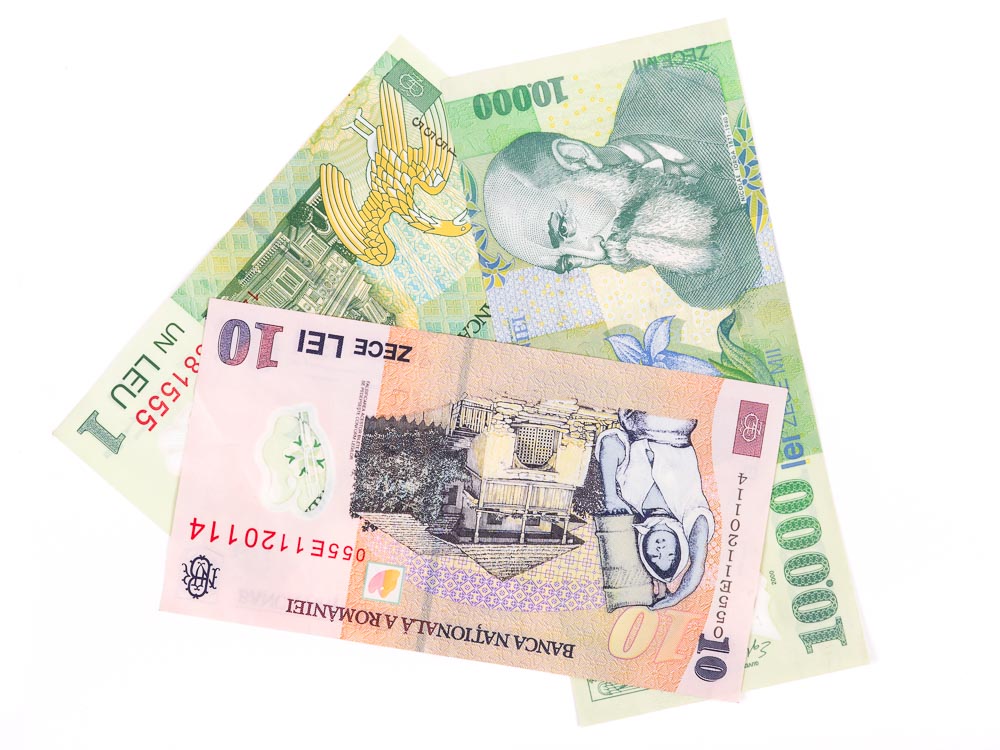 The Lira was the currency of Italy and Malta before it was replaced by the Euro. It is still the national currency of Turkey.

The origin of the name lira lies in the Roman word libra, the ancient Roman weight equal to one pound, which explains why the monetary unit in English is still ‘£’, the letter ‘L’ as the initial of libra. The Roman libra was the basis for all monetary dealings in ancient Rome. In Latin, libra means ‘balance’, or ‘pair of scales’, similar to the sign of the zodiac and its symbol.

Exchange your Turkish Lira (2005 and later) The famous German monetary unit mark was originally a standard of precious metal. Established in Cologne in 1524, the mark became accepted throughout central Europe. There was never an English coin called mark, although the term was used as a money of account. In 1703, for example, Daniel Defoe was fined 200 marks. The mark was first struck as a silver piece in Germany in 1873, as a standard denomination worth 100 pfennigs. The word mark derives from the Scandinavian word mearc, meaning ‘sign’. This relates to the physical ‘marks’ on the original metal bars.

The German Mark, or Deutschmark, was replaced by the Euro in 2002. Bosnia Herzegovina still has a mark as its national currency: the Bosnian convertible mark. Markka is the Finnish equivalent to the German mark. The markka was first struck in 1860 as a silver coin with a value of a quarter Russian rouble, since Finland was then part of the Russian Empire (from 1809 to 1917). The Finnish Markka was the national currency of Finland until the introduction of the Euro in 2002. The name peseta is a diminutive of peso, meaning ‘weight’ and ‘piece’, referring to the famous ‘piece of eight’ first struck as a silver coin in the 16th century with a value of 8 reales. Peso is a shortened form of Spanish peso de a echo, meaning ‘piece of eight’.

Pesetas first appeared in the 18th century under the name peseta provincial, a currency intended for internal circulation only in Spain. The first peseta coins were a silver minting, worth 2 reales. The Spanish Peseta was the currency of Spain until the introduction of the Euro in 2002. The internationally known unit of currency pound is associated primarily with Britain, but exists, or existed, in many other countries of the world as a standard denomination, such as Egypt, Sudan, Syria, Israel (until 1980), Ireland (until 2002)  and Cyprus (until 2008).

The pound is also the currency of the Channel Islands, the Isle of Man, Gibraltar, Saint Helena and the Falkland Islands.

The name pound derives from Latin pondus, meaning ‘weight’. The Old English pound was a unit of weight, initially equated with the Ancient Roman weight called libra, which explains why the monetary unit in English is still ‘£’, the letter ‘L’ as the initial of libra.

As a weight, the English pound was the amount of silver that could be coined into 240 pennies. The figure 240 was based on the value of the Ancient Roman denarius as one two-hundred-and-fortieth of a libra. The first coin to have this whole value (i.e. 240 pence or 20 shillings) was the sovereign. 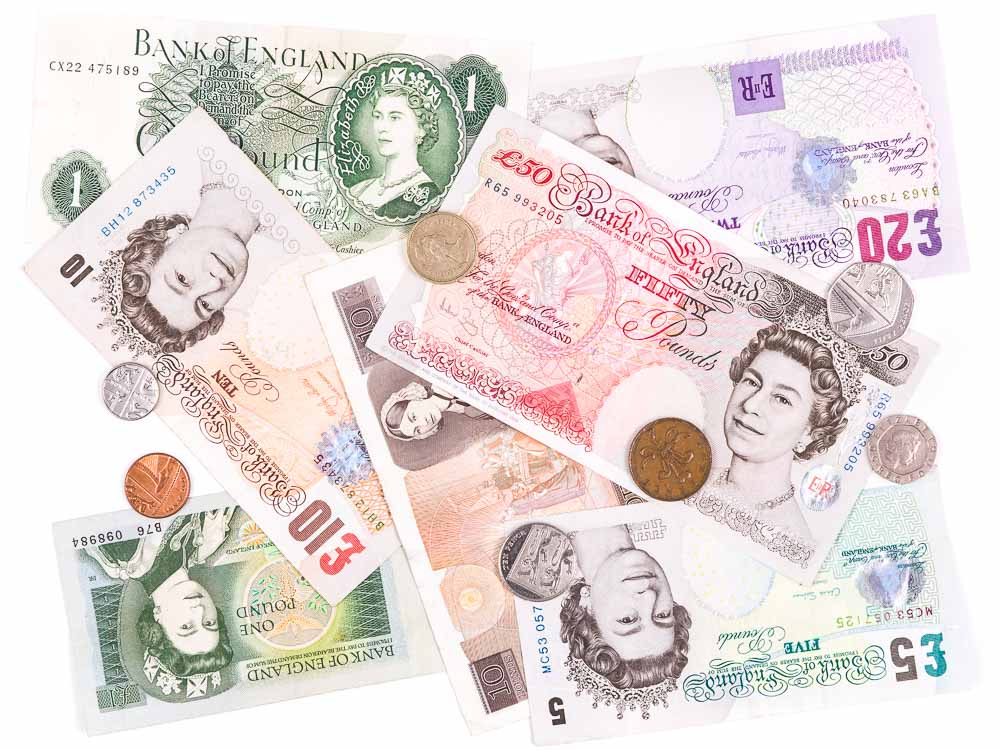 The Riyal is the national currency of Saudi Arabia. The origin or the name riyal is an Arabic borrowing of real, as a general name for any large silver coin from Europe. The real was the standard coin of Spain and Portugal, its name meaning ‘royal’, referring to the king who struck it and whose portrait it bore. The Rupee is the currency of a number of Asian countries, amongst them India, Pakistan and Nepal.

The name is best known as that of the principal monetary unit of India, struck originally as a silver coin in the 16th century. The name rupee derives from the Sanskrit word rüpya, meaning ‘coined silver’. The Schilling was the national currency of Austria before the introduction of the Euro in 2002. ‘Schilling’ has been the name of various copper and silver coins of northern German states. The name schilling is directly related to the English shilling, with both words gradually evolving from a unified original name.Exchange your Austrian Schilling The Israeli New Shekel is the national currency of Israel. ‘Shekel’ was the name of the main silver coins of the Jews in biblical times, originally a unit of weight equal to one three-thousandths of a talent. Its Hebrew name is sheqel, this itself deriving from the verb ‘shaqal’, meaning ‘to weigh’. The Slovenian Tolar was the currency of Slovenia until the country adopted the Euro in 2008. The name *tolar* originates from the historic coin thaler. ‘Thaler’ means ‘from the valley’, referring to the coin called Joachimsthaler, which was minted in the valley of Jáchymov in Bohemia. The tolar and dollar both share the thaler as common etymological origin. The Yen is the national currency of Japan. The name yen is a Japanese borrowing of the Chinese word yuan, meaning ‘something round’, ‘circle’ and ‘coin’.

The Zloty is the national currency of Poland. Zloty means ‘golden’. The name ‘zloty’ was originally used for a gold coin introduced in the Polish-Lithuanian Commonwealth in the 16th century.Exchange your Polish Zloty A special word of thanks to Adrian Room for his wonderful reference work about currency names: Dictionary of Coin Names (1987)
Trustpilot
Our website uses non-invasive cookies to improve your experience. If you want to opt out Read More. Accept
Privacy & Cookies Policy